House on The Great Wall 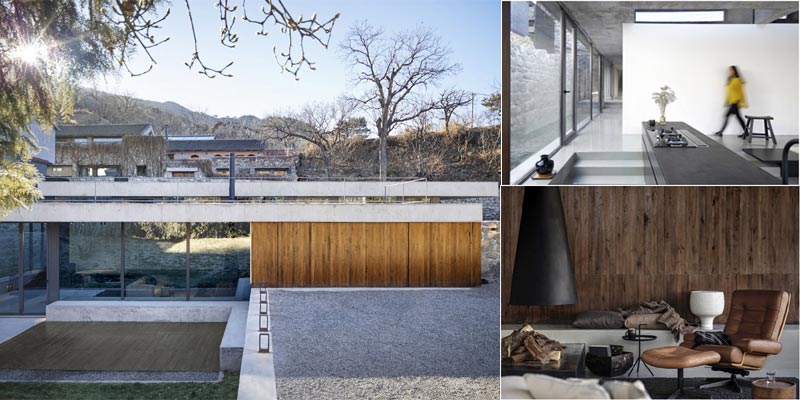 It may sound impossible to have a house in the middle of a touristic spot, especially if that touristic spot is under world’s heritage site. Why exactly? One main reason is privacy issue – where tourist attractions are often crowded with people during the day, a house demands safety and privacy – so the two seem to be contradictory.

MDDM Studio is an architecture studio based in Beijing. This project is so special because it was a project about building an extension to a house near the Great Wall of China. This renovation project does not change a lot of the existing condition, rather just some tweaks on the interior and exterior to make it look more minimalistic and modern.

Because of its location, this house is then called House On The Great Wall – with contemporary living room in the midst of old stones, resembling The Great Wall itself. Before the renovation, the house was a modest property that was used to store tree logs that are over fifty years of age. But the building was sort of abandoned; hence someone decided to turn it into something worth living in. The Owner then chose MDDM Studio to connect the two buidings that were originally separated to become one unity allowing him to have bigger living space.

The house has glass walls on the perimeter. These windows overlook the old bricks and stones that act as the gate surrounding the house; but these windows also allow natural daylight coming into the space.

The house design presents two zones at different heights that leave us with a small opening where sunlight can penetrate into the house. As a result, the whole house has ample amount of light.

Though a large part of the extension is a white plastered wall, MDDM Studio gave a warm touch to the house atmosphere by adding wooden partitions. This makes the whole setting calmer, more contemplative amidst the busy street for it is located at one of the most popular spots in the whole China region. Furniture are also carefully chosen – those that give an extra sense of warmth, down-to-earth, and grounded, to keep with the theme of the space.